PAMM Hosts Miami Carnival Kick-Off Where It All Started 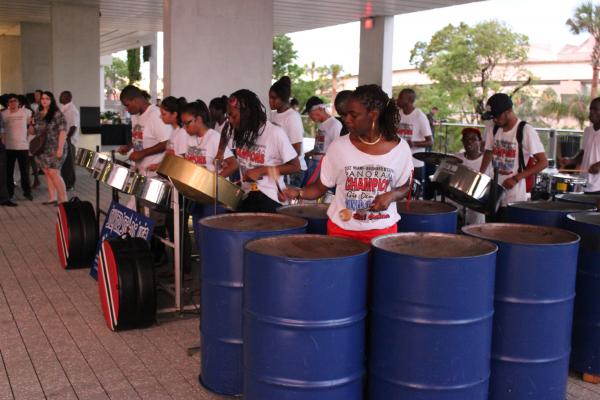 Posted at 17:11h in Media feature by admin 0 Comments
0 Likes

PAMM Hosts Miami Carnival Kick-Off Where It All Started

On a rainy and humid afternoon, a steel drum band played on the outer terrace of the Perez Art Museum Miami. The distinct Caribbean sounds celebrated the launching of the 30th Miami Carnival.

South Florida’s version of Carnival takes place in October, whereas Brazil and the Caribbean celebrate in February and March.

According to Sydney Roberts, vice president of Miami Broward One Carnival, the festival traces its origins back to Europe in times when celebrations were held before the beginning of Lent. These traditions were transferred across the Atlantic in the 15th and 16th centuries by European explorers.

Roberts says it’s fitting to have the launch celebration at the PAMM due to the festival’s origins.

Pointing towards the MacArthur Causeway from the museum’s second-floor café, Roberts said, “Being in [what used to be] Bicentennial Park is a bittersweet experience because this is where the carnival, the Miami carnival, really grew.”

Roberts says the festival had 30 to 40, 000 attendees in the pre-PAMM era. Carnival participants would march south from Miami Avenue and 31st Street, head around the back of the Miami Herald building and finally under the causeway and into the park.

Within its 30 years, the festival has been held at locations from Homestead through Miami Gardens. And its location hasn’t been the carnival’s only diverse trait.

“Originally, when the carnival started here, it was primarily Trinidadians,” says Roberts. “Over the 30 years it has evolved, now that the committee it is very, very representative of the Caribbean.”

From Guyana to St. Lucia, the carnival’s committee is, according to Roberts, “now truly a Caribbean organization putting on a Caribbean festival.”

According to Tobias Ostrander, PAMM’s deputy director of curatorial affairs and chief curator, Milhazes draws inspiration from her native surroundings in Rio de Janeiro, especially the time of carnival.

“[But] there are parallels,” he says. “There are some of the same practices and some of the same types of materials and a similar form of energy in forms [of] carnival in Trinidad and in Brazil.”

For Roberts, the most important elements of both Caribbean and Brazilian carnivals are the same.

“Brazilian carnival, even though it is the same time, same day, is a different kind of carnival. Our carnival has costumes, masks, music, steel band — theirs doesn’t have steel band. But it is all about the same thing: life, enjoy life and living life.”