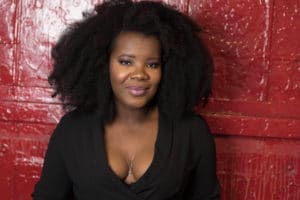 Miami Carnival brings together foods from several different backgrounds, which means there is a great variety of dishes to try. Some traditional dishes include Jamaican goat curry, roti (a wrap stuffed with curried meat), soup joumou, jerk chicken (very spicy!), coconut water, ginger beer (a soda made with ginger and sugar), rice and beans, fried plantains (a type of banana), and Jamaican patties (pastries filled with spicy beef or chicken). Yummy!
Caribbean National Weekly caught up with Chef Nadege Fleurimond to find out the role that food plays as a cultural expression in the Caribbean community.
What cuisine is your specialty?
I was born in Haiti but raised with the diverse flavors that New York had to offer. Haitian cuisine is the foundation of how I cook while implementing the flavors of Asian, Latin, and other Caribbean nations.
I attended multicultural schools all my life and found food to always served as the icebreaker and connector among those of different backgrounds. No one fights or argues (at least not much) over amazing food. So from an early age, food served as a bridge to make friends and share cultural heritage. Thus, I create in a way that connects my audience. For us to see our similarities rather than where we are different.
How long after you started your career did it take you to feel like you could and would make it to the higher echelons of food, where you sit right now?
My good career was purely accidental. I grew up in an immigrant household where you were raised to be a doctor, lawyer or engineer. Anything else was a failure. So I battled with accepting myself as a chef for a long time. I started my catering company in 2002, my junior year in college. Before graduation, I already had a great client list but considered food a hobby. I pursued an office job in government since I had majored in Political Science. 6 years later when my client list consisted of Dr. Oz, BET, Vivica Fox, Al Jareau, Wyclef Jean, etc. I still would spend my nights studying for the LSAT. I didn’t fully admit to myself that this food path was indeed THE path until perhaps 10 years into my career. So it’s a process that happened in reverse. By the time I had accepted that food was the path, so much had happened.
Who, if anyone; have you learned the most from when it comes to creating dishes?
I’m not a loyalist in anyway way. I follow various people and appreciate them in different ways.  I appreciate Ming Tsai because for me cooking has always been about bridging cultures. As a Haitian chef, food serves as a way to share the tradition and culture of my homeland with my adopted home. My cookbook Haiti Uncovered, created for the US audience is a cultural journey to the culture and food traditions of Haiti.
But when I go to Haiti, my US upbringing provides a way for me to stretch some of our traditional cuisines. How can we utilize this yam, plantain, herring that we usually use in this way, and create a casserole or use this cornmeal/polenta and create a herring sushi roll?
Do you have a favorite ingredient?
Ask any of my friends, and they will tell you “thyme” with no hesitation. I say this so much that I have vowed to disown them if we are ever on a game show and they get this wrong. It just has such a smooth yet very distinct flavor
What’s your favorite way in Miami to enjoy your day off?
I love art. I am not from Miami, but whenever I’m visiting, I go to Wynwood Walls for murals and some good eating on the strip

Why is food is a very important aspect of many family traditions and Caribbean culture?

I’m a strong believer that food is the real soundtrack to our lives. But I think for Caribbean and people from colonized nations, Sunday’s were so important. It’s the only day where we got to gather and connect with family and friends and bond and that bonding often existed through some food component. Whether it was selling/bartering produce or food at slave markets or using the day to cook, food often came into play.
Nadege Fleurimond is an entrepreneur, chef, speaker, author and business strategist living life in New York City. Utilizing her Haitian culinary background as a guide, As a chef, Fleurimond pulls a world of flavors from Asian, Latin American and African Cuisines to create tasty events that inspire, motivate and unify. Her catering company, Fleurimond Catering has catered for companies and institutions such as Ann-Hauser Busch, Columbia University, New York City Hall, BET News, and The Colbert Report, as well as notable individuals such as Vivica A. Fox, Al Jareau, and Dr. Mehmet Oz’s organization Healthcorps. Nadege has also catered at the White House.
Nadege is the author of two books. Taste of Life, part cookbook, part memoir, Taste of Life offers readers an opportunity to view their own lives through a culinary lens and appreciate the beauty of food, family, friends, and tasty pleasures. The book is a humorous journey into the life of Nadege Fleurimond as she navigates her way through the world of food and the personal experiences with her family, friends and acquaintances she encounters. Her latest book,Haiti Uncovered, is a culinary travel coffee table cookbook that delves into the Art of Haitian Cuisine and brings into focus the beauty of Haiti through its diverse culinary traditions there by offering Haitians and non-Haitians an opportunity to explore and learn. The beautifully bound and illustrated, hard cover book, presents and represents the dishes, recipes, and cooking traditions, from all the 10 geographical Departments.
Nadege graduated with a degree in Political Science from Columbia University. She is the recipient of the New York Media Alliance’s Ethnic Press Fellowship for 2010,  and the  2011 Feet in Two Worlds Food Writers Fellowship from NYC Media. Nadege has appeared on Food Network’s Chopped and has received a US Embassy grant to provide Culinary Diplomacy work utilizing the culinary arts as a tool for empowerment, entrepreneurship, and self esteem.
Through her own quest for self discovery,  Nadege has learned and wants to reinforce, that the sky is indeed the limit. Who you are is not tied to a job title. Your true self will manifest no matter where you place yourself. Thus, through her ROAR(Reach, Organize, Act, Realize) Living method,  she encourages a life of passion and purpose.