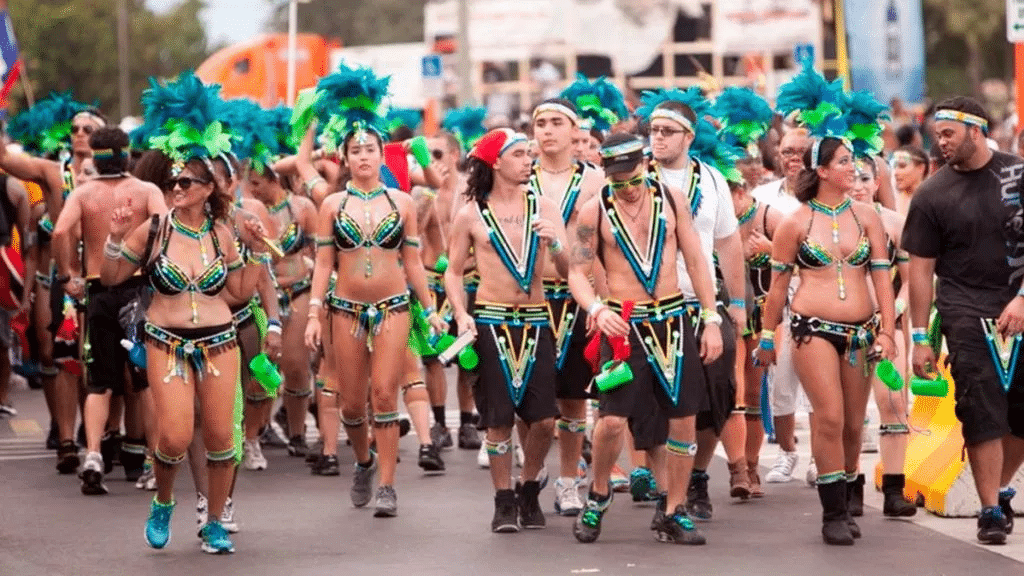 Posted at 21:08h in Media feature by admin 0 Comments
0 Likes

The annual celebration of Caribbean culture and community commemorates its 30th year at the Miami Dade County Fair & Expo.

After years of partying in the streets of Miami Gardens during Columbus Day weekend, the Miami Broward One Carnival is taking Sunday’s fete farther south to the home of the Miami-Dade County Fair and Exposition.

The shift was the result of various factors including the Miami Dolphins playing an away game in London and the host committee attempting to stay true to the Columbus Day tradition. Organizers remain hopeful that the change in venue won’t reduce participation, especially for the carnival goers traveling from Broward County and Miami Gardens.

“Even though it’s 20 miles south of Sun Life [Stadium] it’s easily accessible,” Marlon Hill, an attorney and supporter of carnival, said. “Probably 60 percent of the attendees will come from north of the fairgrounds.”

Hill added that even though the main event is taking place farther south, there were multiple events in Broward including the junior carnival last Sunday (Oct. 5) and J’ouvert, the daytime body paint, steel pan drum event, and the King and Queen Panorama masquerade party. Both events are taking place at the Central Broward Regional Park, 3700 NW 11th Pl., in Lauderhill.

Organizers originally ran into some issues in May when it was announced that the carnival would be split between the two counties and take place on on two consecutive Sundays, Oct. 12 in Fort Lauderdale and Oct. 19 in Miami Gardens.

After fans of the party expressed their concerns and frustrations with the change, the organizers agreed to have the carnival on the typical Sunday before Columbus Day.

“The carnival committee listened and the community spoke boldly and loudly that they did not agree with changing the date,” Hill said.

Francis Ragoo, a former carnival party promoter and Miami Gardens resident, said that crowds are drawn to carnival from across the country and the Caribbean, so traveling to the fairgrounds shouldn’t be a major issue.

“The enthusiasts support the carnival because this is their natural culture and it embraces all of the Caribbean cultures,” Ragoo said. “Having to drive down to the venue, it’s a small sacrifice for the traditional joy.”

Sheila Sawh-Gowkaran, owner of Joy’s Roti Delight restaurant in Lauderhill, said that some people have come in and said that the new destination is too far, but she hasn’t seen a drop in people coming to purchase tickets or buy food when compared to previous years.

“They don’t mind where [carnival] is in South Florida, they’re still coming to me,” Sawh-Gowkaran said. “We have people coming all the way from South Beach, they come as soon as they leave the airport.”

So as the parties begin and as the carnival arrives Sunday, organizers and supporters are hoping to find a consistent space like the one the West Indian Day Parade has in Brooklyn, New York along Eastern Parkway during Labor Day weekend.

“Thirty years is a major milestone so that’s something we have to look at. They’ve been looking for stability for years,” Ragoo said. “The question remains, do we have a home or do we have to move again?”

But for now, that question will linger in the background as attendees enjoy the music and performances from soca and chutney musicians including Red Hot Flames, Dil-e-nadan, Farmer Nappy, Iwer George, Ricardo Drue, headliner Kerwin Dubois and more.

This will be the sixth consecutive year that the two counties will come together for one big party after years of division and holding dueling carnivals on the same day. Last year 37,000 people attended carnival and the committee expects similar numbers, if not more.

Supporters like Hill think the new space at the fairgrounds will be more than sufficient for the array of colorful and ornate costumes, the drumming and dancing and the pulsating presence of the music and marching.

“This festival is a lifeline for thousands of Caribbean immigrants and certainly builds a bridge for our acclamation and prosperity in the United States,” Hill said.