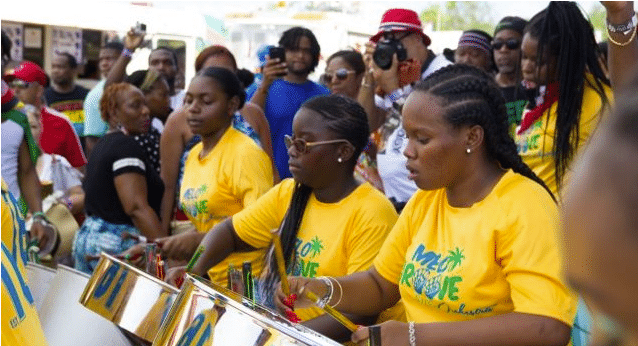 Steel Pan or steel drums were created in the Caribbean islands of Trinidad and Tobago in the early 1930s. The Steel Pan is a unique form of musical expression, but the origin of steel pan started centuries before in Africa. Africans brought the concepts of drumming and festival which would eventually evolve into Carnival when the Spanish and then British-ruled Trinidad & Tobago.  There was even a period in 1877 where the British government tried to ban aspects of the Carnival. They found parts of Carnival offensive including the drumming. Drumming was mainly done by instruments made out of bamboo with stamping tubes and some metal containers and some scrap metal. By the 1930s the metal instruments dominated and we began to see what we know as today as the Steel Pan aka as the Steel Drum. The cultural form began to grow among people of colour on the island. Steel Pan & Carnival even became cultural manifestations that united the African and Indian populations in Trinidad & Tobago.

In the early days of the Steel Band acceptance was not across all areas of Trinidad and Tobago society.   After many evolutions, the Steel Pan Culture would, however, eventually become a national treasure, especially under the father of the Republic of Trinidad and Tobago, Sir Eric Williams. The Steel Pan was now the source of great pride for all Trinibogians.  The instrument travelled throughout the Caribbean and Central America and eventually the rest of the world. Today Steel Pan groups can be found anywhere that Caribbean communities are heavily saturated. There is an organization that is helping to keep the culture growing right here in South Florida.

The organization is The Melo Groove Steele Orchestra Inc, a non-profit organization started through the inspiration of a Trinidadian who played Steel Band instruments since the age of 12 during the early decades of the Steel Pan Movement. The late Mr. Melville Esdelle (1939 – 1992) had come to Florida where he taught children how to play the Steel Pan instruments. The organization began operations in the city of Sunrise the 1st of January 2016, continuing that mission of Esdelle, affectionately called Melo. According to the organization “Melo Groove Steel Orchestra, Inc. strives to keep Melo’s dreams alive which are creating a safe structured outlet for young people to embrace the culture and to continue to elevate steel pan music,” a dream that includes teaching children and henceforth keeping the culture alive and growing.

Melo Groove Steele Orchestra’s general manager Bryan Heyliger shows that the Orchestra is a family, community, and cultural manifestation. At age 10 his daughter had gotten involved with the orchestra, which came about by the influence of her Trinidadian godfather. Heyliger’s wife soon followed after going to the practices, and eventually, Bryan Heyliger was brought in soon becoming general manager. His son also recently started playing Pan. According to Heyliger, “my Caribbean heritage comes from the small beautiful Island Federation of St. Kitts and Nevis, whereas my wife’s heritage comes from the Republic of Trinidad and Tobago. As for my daughter as the saying goes, “wherever your parents are from, that’s where you are from as well.”

Besides providing great cultural entertainment along with both mental and musical skills for youth and adults in communities throughout, the spreading of the Pan Culture is a teaching tool about the Caribbean. Heyliger accentuates this point by stating, “the views that impact one’s heritage……(are) that if we the parents fail to teach our children here in the US about our Caribbean culture we have the fear of seeing it being lost.”

Illustrating the power of family in the orchestra, Heyliger describes how he has been influenced by Esdelle, although never meeting him. “Unfortunately, I was not blessed with meeting Mr. Esdelle, however, I can definitely say that I have met him through our Grandmother (his wife) of the band, Mrs. Elaine Esdelle and I call her Ma. The passion, support, and love she displays are clearly a representation of Mr. Esdelle aka Melo”.

Within the South Florida community, the orchestra is gradually making an impact. “We have created a band with a difference. Meaning that we do not just play music for our audience, we perform for them. I have observed a strong sense of acceptance from ALL of our performances during our little over a year of being in existence. Also, we have created a family oriented environment for the children to express their talents while creating memorable milestones.” “Steel pan music has been now embraced all over the world, and, there are still platforms open to sharing this wonderful style of music. (We) make a difference by playing ALL genres.”

Existing as a Steel Pan Orchestra in the United States does have challenges. Heyliger gives us insight on this by stating, “this is a very important part of the survival of this musical art. Many bands face the challenges of practice space, funding, and exposure. If these areas can be addressed I feel that Steel Pan can be elevated at a higher rate.” The funding mainly comes from those in the orchestra’s organization, performances, food sales and donations from supporters.

Challenges there are but in a short time, this orchestra has already been able to achieve watershed moments. “One of our very huge accomplishments was placing 3rd in our first panorama competition in 2016. Melo Groove was formed in January of 2016 and played for the first time in May of 2016. So, to see how dedicated the band was to put our best foot forward for our first competition is a feeling none of us can forget. Then to have Kes himself give us props for our people arrangement was also awesome.”

The accomplishments and skills that are present with this orchestra so quickly beg the question: what will be seen in the future? “I see a Melo Groove Steel Orchestra Performing Arts Theatre. Some may say that it seems far-fetched but I know the potential of my team and it would not be impossible, just another accomplishment under our belts.”

All the above is possible because the team at Melo Groove Steel Orchestra “has created an environment that draws young people. We have also engaged musical directors that have had prior experience with teaching children. Overall, giving the young people a voice in the band and always showing them support in the band and outside of the band creates that bond.”

Heyliger credits success to the fact that “we put God first and then embrace teamwork and family values.” Currently, the orchestra is focusing on upcoming events, “we are preparing for the Houston Caribbean Festival that we were invited to take part of and after that trust me we have big plans for South Florida and even beyond. Definitely claiming the 1st place this year at Panorama. Each day and every minute Melo Groove Steel Orchestra is here to keep PAN ALIVE!”

Melo Groove consists of 15 pan players, 6 rhythm players currently. According to the Melo Groove Steel Orchestra Facebook page: “we will always aim to please our audience which consists of a variety of cultures. Our musical selections include R&B, Classical, Jazz, Reggae, Soca and more. Our goal when we perform is to engage with the audience and to leave a lasting impression.”