Get to know She-J Hercules 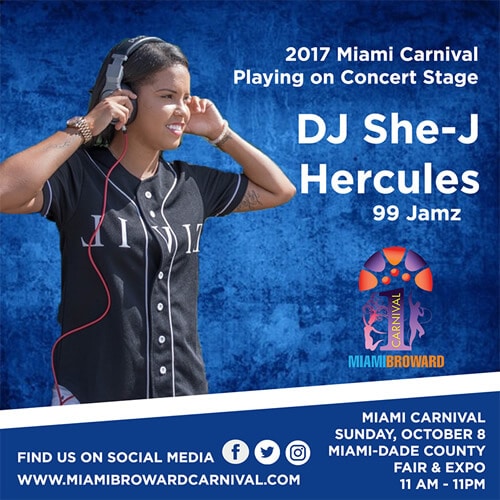 05 Aug Get to know She-J Hercules

Q: Where are you from?
A: I was born here in Broward County, Florida. Mother is from Georgetown, Guyana, and Father is from Laborie, St. Lucia.

Q: Favorite dish from your island?
A: Curry Beef and Roti, Doubles

Q: Who were your influences as a DJ coming up and why?
A: Beverly Bond was a big inspiration for me coming up as a DJ along with MC Lyte because they are both powerful, independent women who used their passion such as music and djing to create a pathway for women in this industry that is mostly male dominated. They give me such inspiration because one day, I know I will be able to make it to the top and be just as humble and blessed as they are touching other people’s life while doing what I love.

Q: As a DJ, what is in your personal playlist? Morning inspiration, afternoon drive and evening wind down?
A: I enjoy listening to a plethora of genres in the morning and afternoon such as reggae, soca, hip hop and top 40. As, long as the music is upbeat and hyped, I will be able to get through my day. In the evenings, I enjoy some nice RnB throwbacks or classic reggae songs to wind down from my day.

She-J Hercules is known as the hottest Personality and Female DJ spinning! She is the first ever female mixer on 99 Jamz and continues to kill the airwaves every Monday, Wednesday, and Friday for the Ultimate Midday Mix! Hercules is a native of South Florida with parents of Caribbean decent. In her earlier years she went to a private Christian school in Broward County and later she pursued her college career at Florida Atlantic University where she received her bachelor’s degree in Sociology. She-J Hercules continues to set the path with those who share the same passion for music and radio.