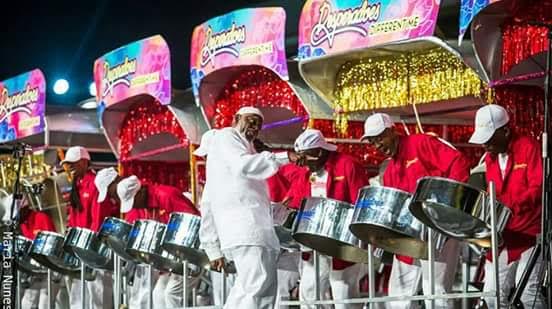 The Desperadoes Steel Orchestra “Despers” was formed in Laventille in 1945. They were initially named The Dead End, a reference to the Dead End Kids films. They became notorious for regular clashes with other bands and the police. In the early 1950s, Wilfred “Speaker” Harrison and Donald Steadman joined, bringing a more professional focus that saw the band sign a sponsorship deal with Coca Cola in 1962 with the band name changing to the Coca Cola Gay Desperadoes at the same time, the name chosen from the movie Desperadoes starring Glenn Ford that was shown in Port of Spain at the time.

They dropped ‘Gay’ from the name in the 1970s. The orchestra has worldwide appearances and has performed at the Royal Albert Hall in 1972, Carnegie Hall in 1987, and performed with the Opera singer Luciano Pavarotti in Barbados in 1996.

Despers have won the National Steelband Panorama competition of Trinidad and Tobago a total of eleven times in their history. Their most recent win took place in 2016, where they won with a total of 285 points.

Desperadoes have also toured some of Trinidad & Tobago’s motherlands; such as Africa, India, China, England and Grenada. The band has qualified for the most Panorama finals, 49 of 53, was a finalist for 36 consecutive years 1976 through 2011, has the highest winning percentage victory every 4.8 years, has won every entered competition, and has a total of 25 combined victories out of 69 various competitions, from 1965 to 2016.

Here’s a clip from Desperadoes’ title winning performance of 5Star Akil’s “Different Me”, which was arranged by Carlton ‘Zanda’ Alexander.