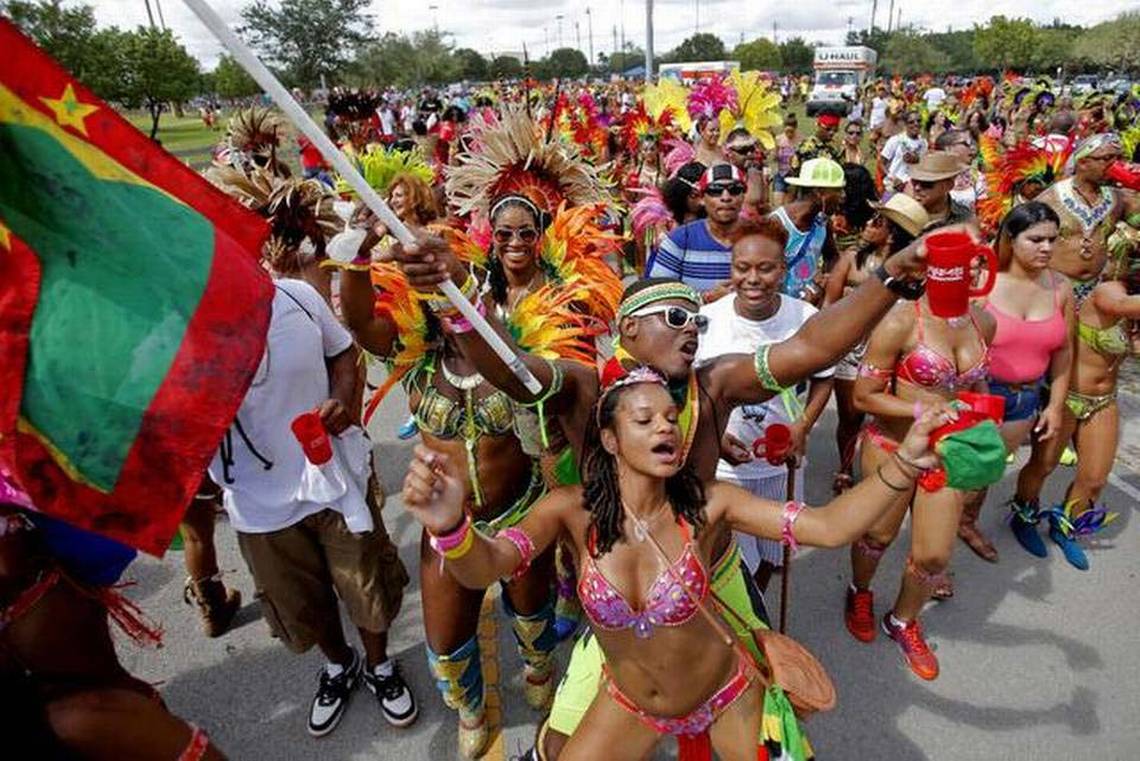 Posted at 11:43h in Uncategorized by admin 0 Comments
2 Likes

The aroma of Jamaican beef patties filled the air. Hundreds of people wearing colorful wings and glittery costumes danced happily to Soca music reverberating from traveling walls of speakers. And the drinks flowed deep into the night.

For the first time in years Marlon joined in on the festivities, performing in the parade alongside his wife, Carla. The couple was a vision in royal blue, with Carla donning a silvery blue two-piece and an almost 4-foot-wide pair of white and blue wings. Glittery gems decorated her cheeks.

“Carnival for me is just a love of my culture […] Carnival makes me happy,” she said. Carla has been “chasing Carnival” all year, traveling from Trinidad to L.A. to Jamaica, dancing in street festivals wherever she can find them. A two-time breast cancer survivor and kidney transfer recipient, Carla is thankful to be able to celebrate her favorite holiday all over the world this year.

“It’s all about living life and even though it isn’t always perfect, I’m happy to be here and celebrating today,” she said with a big smile.

The Carnival festival in Miami typically happens on Columbus day weekend and includes a street fair and parade organized by people with Caribbean roots, with a strong influence from from Trinidad and Tobago, the Bahamas, the Virgin Islands, Antigua, Jamaica, and Barbados.

Historically, Carnival is a pre-Lent celebration within the Roman Catholic tradition that began in Italy, marking the last days before a 40 day commitment to austerity. It’s name is rooted in the latin carnelevarium, which means “to remove meat,” according to the Encyclopedia Britannica.
“Carnival is a cultural tradition that has been happening for decades and for centuries. During the time of slavery, slaves would mock their caretakers, who were dressed in these costumes,” Hill added.“When people travel, their culture travels with them,” according to Dr. Patricia Saunders, associate professor of English with a focus on Caribbean literature at the University of Miami. The tradition spread from Trinidad to many of its neighboring Caribbean countries.

A festival-goer who has been in the parade since she was 4 years old. Spanish, and Portuguese embarked on the slave trade, spreading to parts of Africa and the Caribbean, they continued to celebrate the Catholic holidays wherever they settled. This influenced the cultures of the places they went. Now, the two major meccas of Carnival in world today are in Trinidad, which was influenced by French colonization, and Brazil, which was similarly molded by the Portuguese.

It is composed of a number of different elements, including mas, or dressing up in masquerade. When used in a sentence, mas is more of a verb than an adjective, as festival goers ask one another “Wha’ mas ya goin’ an play?” to mean, “what are you going to wear?” It describes the costume being worn, being as simple as a glitter smear or as large as a pair of 20-foot multi-colored wings.

A steel drum band led the festival parade, with a group of almost 20 men joyously banging on hollowed out silver drums. The tradition of playing steel drums began when the panwas invented in Trinidad the 20th century. When hit with a rubber stick, it produces a high-pitched, tin-like melodious sound.

Calypso, an Afro-Caribbean style of music characterized by syncopated rhythm and improvised words, blasted through the fairgrounds for almost 12 hours, beginning at 11 a.m.

“In the late 70s and 80s, many Caribbean people moved to Miami, and [not long] after, Carnival began,” according to Hill. “The first Carnival celebration came in 1984 in Miami Gardens on 183rd Street.”

Home to almost half of the 3.5 million Caribbean people living in the United States, Florida has  the largest Caribbean population in the country, with most living in the tri-county area, according to a 2009 study by the Migration Policy Institute.

Last year, more than 20,000 attended Miami Broward One Carnival at the Miami-Dade Fairgrounds with visitors hailing not just from across Florida, but New York, D.C., and Atlanta as well, according to Hill. This year, organizers expected even more attendees, coming from all around the country to play mas, bang on steel drums, and dance to Calypso deep into the night.

“This is a significant event that captures the spirit, passion and essence of the Caribbean-American community,” Hill said. “When you talk about living like you live here, you talk about celebrating each other. And celebrating the places you come from.”