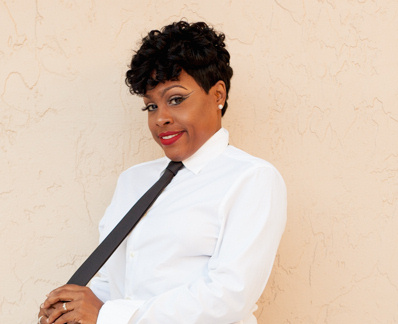 SOUTH FLORIDA – When you hear the name Giselle Blanche, you may not think it’s anyone you’ve heard of but if you hear the name Wassi, some recognition may occur. Her signature line is “Miss it?  Yuh mad or wha!” Her energy and charisma is undeniable, the speed of her talk is amusingly unforgettable.

She has been on our local — and foreign — airwaves for many years. Residing in Miami, Florida, for several years, she visits Trinidad for the Carnival season annually and is usually a guest co-host on several stations during this time as she freelances as a marketing partner for Tropix Entertainment which is headed by promoter, Cliff Harris. Within this partnership, she promotes Fire Fete, the Army fete and the Anchorage Cooler fete, among other events.

Born and bred in Brooklyn, New York, but having Trinidadian parents, this ever energetic “sweetbread of a person” said, “I only came to Trinidad during the summer vacation.” A patriotic Trinbagonian, she has made a name for herself embracing the culture of Trinidad and Tobago. “Whoever wants to hire me, once I can highlight my culture, I am there!”

The god-daughter of two legends in the art form, Baron and Superblue, Blanche said her wish as a child was really to become an obstetrician/gynecologist. “I wanted to be a part of the process that brought life into this world. It’s something extraordinary.”

“I was told many years ago when I became involved in the cultural aspect of things, that I was so much smarter than that and I was asked why I was wasting my parents’ money and not studying to be a doctor.”

“I knew that this, the culture and the music, was it for me. I just love everything about our culture. I’ve done Afro-Caribbean dance, Indo-Caribbean dancing for chutney shows — yes, I have! — I have been flag woman for the Starlift Steel Orchestra. The only thing that has missed me is playing Queen of the band on the Savannah stage. Did you know that they brought back the stage just for me? Don’t say I didn’t tell you. That stage was brought back for me!” Blanche has been leading her own mas band in Miami since she was 14 years old. “Nicole, don’t you dare start calculating how old I am! You hear me? I am just eighteen years.” she admonished playfully, collapsing into a throaty laugh. Her adult band is Wassi Ones, jouvert band is Something Jouvert and her children’s band is Wassi Babes.

“I have never imported a costume in my life. I put a lot of love into my costumes. I’ve participated in many Carnivals, for example, Cayman Islands, Turks and Caicos, South Carolina, Hollywood, you name it. Wherever they want me, I go.”

Her devotion was recognised in an official way when she was awarded the Selman Lewis Culture award in Miami, the significance of that award being for persons who took culture to the next level. “That award was special because he was like a father and mentor to me before he passed away.”

The hats that she wears are many.  Host.  Promoter. Bandleader.  Radio Personality.  Mother.  Cultural Ambassador.  She even adds soca artiste to her resume, having done songs with Denise Belfon, Alison Hinds, Benjai, Gailann, GBM as well as two popular music videos under her belt for her songs “Pumpin” and “Get On Wassi”.

Trusted and respected by many public personalities worldwide and of various genres, she has a circle of artistes to whom she “acts as a support system”.  One who just naturally cares about others in a deep way, she hopes to one day provide free testing centers throughout the Caribbean for breast cancer.

“It doesn’t matter to me if I have $1M or no dollars at all. I am rich because I am blessed by God. There are no haters and no obstacles because God is there. Faith carries me through and I believe that there is a lesson to be learnt in a day’s experience.”

“I just want to be able to leave a legacy for my son.” Many people told her when she was a young girl, “You’re a star, and you’re Miss Magic.” That has rung in her ear up to this day. The beautiful thing about it is she shares her magic with those who believe.

Giselle The Wassi One – Marketing Influencer

Snapshot Facts About Giselle The Wassi One

– Started her band at 14 in Miami Carnival.

– This year her band celebrates 28 years on the road.

– She is Miami Broward One Carnival and it is her.

– Miami Carnival is rooted deep within her Caribbean belly.

-” Our carnival unites Caribbean nationals from across the world for many reasons including the fact that we have a great location, great weather, we are close to home and we brag of some of the best parties surrounding it.  Miami Carnival is staple in the carnival calendar”, says Giselle.